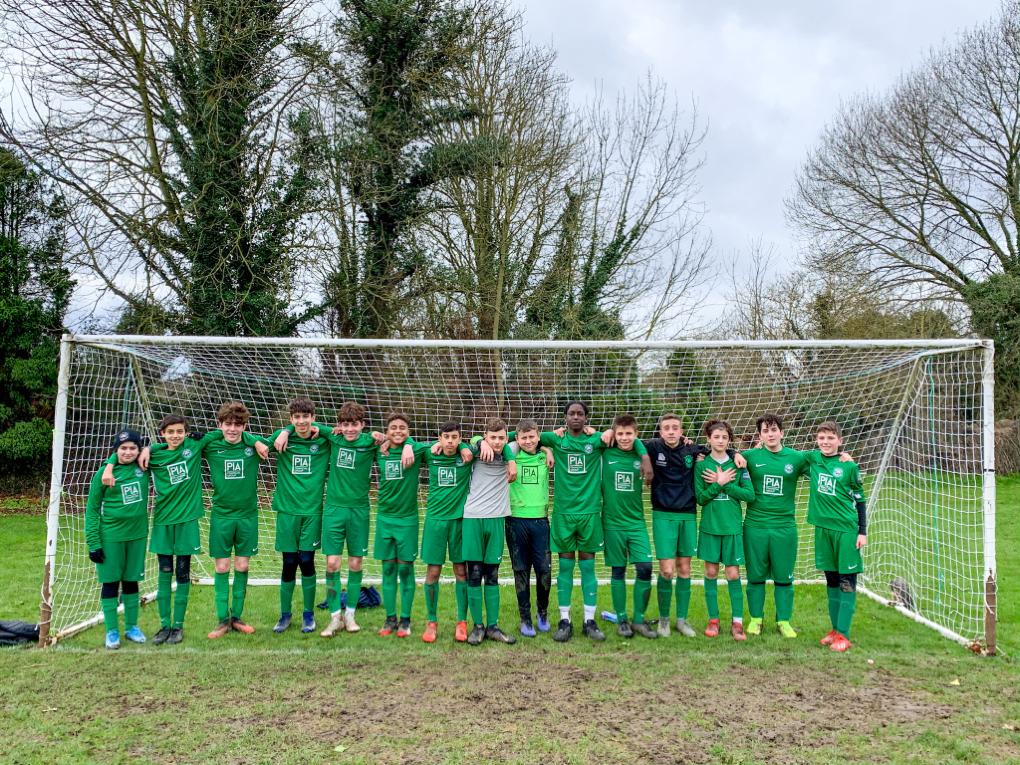 Chris and Jimmy Mousicos’ Under 15 Gold put on fantastic performance in their Middlesex County Cup quarter final tie putting seven goals past their opponents to move into the last four. In a dominant and disciplined performance goals from Vansh, Louis, Kayden, Robin, Mo, Craig and Liam secured the win. Well done to all and good luck in the semi-final.

Adam Demetri and Evagoras Mandrides’ Under 14 Silver have even more to celebrate as they won their Middlesex County Trophy semi-final against a team riding high in the Mid Herts Premier Division. A rightly proud Adam provided us with this summary of the game:

“The boys were nervous and this showed as they conceded from a corner within the first 5 minutes. However, the boys fired back after a lovely through ball from Peter found Brodie who scored the equaliser. An error at the back gifted the opposition a goal and we were 2-1 down. This spurred the boys on and from this point they started playing some excellent football. The boys kept to their game plan and scored twice to bring take them into the half time break 3-2 up. The boys really felt that they could win and with a few words of encouragement the boys went out in the second half full of belief. The boys kept it nice and compact for 15 minutes and then hit their opposition with a wonderful counter attack to go 4-2 up. The boys were now in control and just didn’t allow their opposition to play. With 5 minutes to go Omonia Silver scored an own goal from a corner to leave their coach with his heart in his mouth but the boys had other plans as they then scored a fifth to make it 5-3 to secure the win and a place in the final! Everyone involved is over the moon and the whole team deserves to be man of the match but I’ve given it to Brodie because even though he was playing as a loan striker he didn’t stop running and kept working hard.”

An amazing result for the Under 14 Silver. Well done to the team. The final will be played on Sunday 17 May.

Savva Zavros and David Poncia’s Under 14 Gold won their league game 5-2 as they handled the extremely windy better than their opponents. Having not payed for three week was definitely an issue as they battled the wind but they played some fantastic football. Passing patterns has been the focus in training and there was lots of evidence of that on Sunday. Goals were scored by Leo (2), Jon, Max and Kaian. Praise to Mustafa who volunteered to replace the absent regular goalkeeper and he even saved a penalty.

Chris Gregoriou’s Under 18 White played for the first time in four weeks against the unbeaten team in their division. It was a good game to watch with the Udner 18 White the dominant team throughout the match. However, a lack of concentration at a corner was the difference in a game of very few chances, as both teams were very strong in defence with the opposition winning a tight game 1-0. Maleak Minto was named Man of the Match after a defensive masterclass.

Kyri Georgiou’s Under 18 Green keep on winning and stay top of the division thanks to a 6-3 win.

George Pantelildes Under 15 Girls were brilliant on Sunday as they who fought well, especially in the second half, against a strong wind, driving rain and a tough opponent. There were plenty of shots on target, more than than at any game all season and debutant Christina was very unlucky to not get score. Player of the match was shared between Sapphira and Mary K. George.

The club are holding a celebration Dinner and Dance on Sunday 17 May, where a commemorative brochure will be published, celebrating 25 years of the club. If you would like to advertise in the brochure, please contact the club. The club will also be holding a raffle and an auction on the night; if anyone in the community is willing to donate prizes, as well as buy raffle tickets, again, please contact the club.