Clean sweep for Omonia Youth FC Under 13 and Under 16 teams! 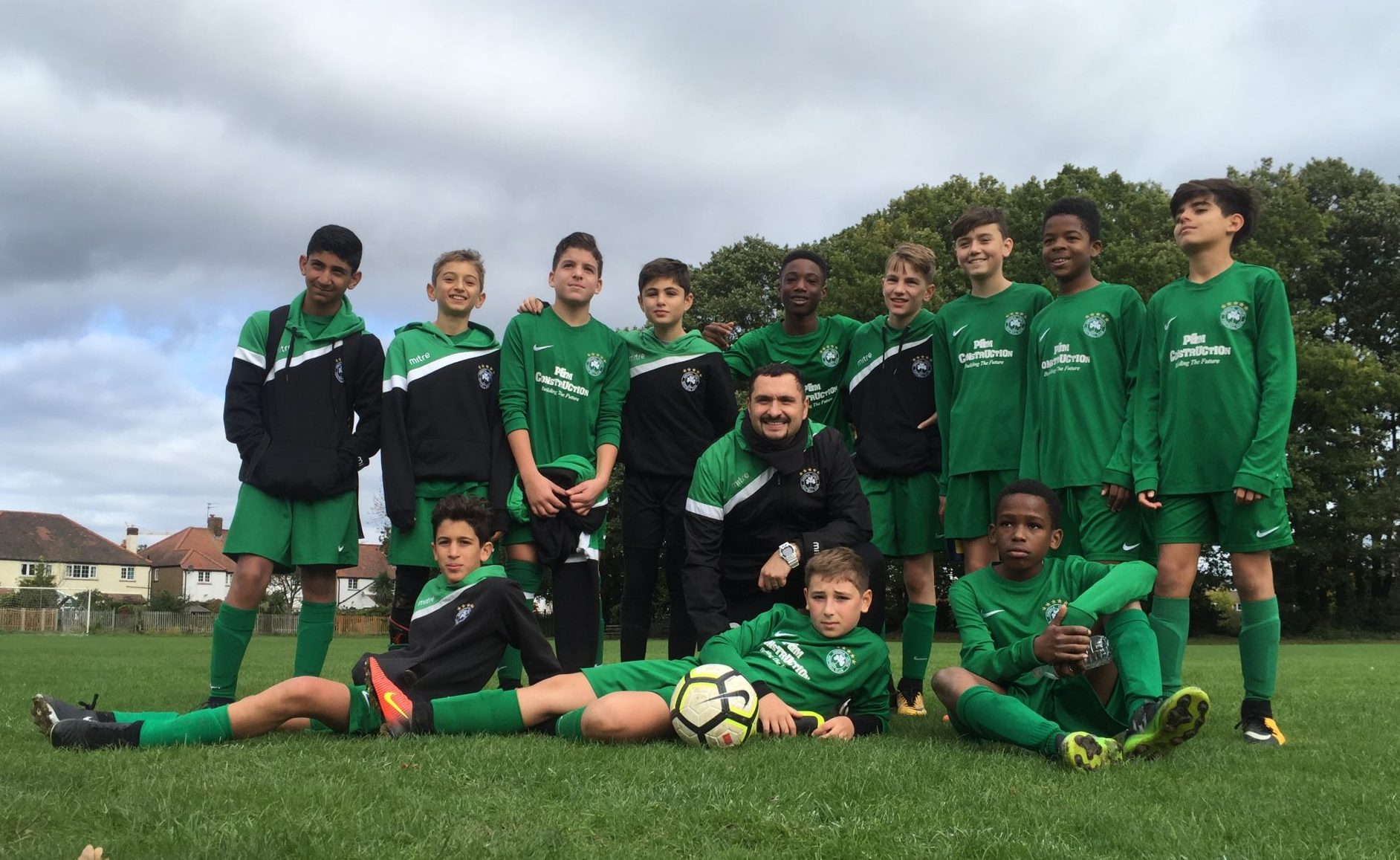 Community football club Omonia Youth FC, sponsored by P&M Construction UK Ltd, had plenty to cheer about on Sunday, with plenty of teams registering wins. Impressively it was a clean sweep for all four Under 13 teams and both under 16 teams as they won on Sunday.

Michael Pieri’s Under 13 White remained unbeaten in the league after a tough 3-2 home win. The team had to work hard to the result their football deserved scoring three excellent goals from Alfonso Rosselli, Emmanuel Onouha-Nzeh and Sami Hristov. Man of the Match was the impressive Godwin Obeng who was immense in defence.

Nick Lingis and Mario Christoforou’s Under 13 Green were taken to extra-time in their Challenge Cup tie but prevailed avoiding the lottery of a penalty shoot out. A scrappy second half performance allowed their visitors back in the game after dominating the first half. Scorers were Raul Amin, George Androustos and a debut goal for Erin Magashi who was also named Man of the Match.

Chris and Jimmy Mousicos Under 13 Gold are also through to the next round of the Challenge Cup with a comprehensive and controlling 8-0 away win.Louis Georgiou scored a fine hat trick and was also named Man of the Match. The other scorers were Kayden Trey Virgo (2), Aaron Lewis (2) and Jay Tyler Constantinou

Finally Harry Theodorou and George Sammoutis’ Under 13 made it four Under 13 wins out of four as their Silver team won 7-3 away. Rohan Biswas was named Man of the Match having netted three goals. Other scorers were Joe Tullis (2), Oscar Hinckley and Ben Poole.

Not to be outdone, both Under 16 teams also won their matches. Kyri Georgiou’s Under 16 Green won 3-1 in a match where the Green’s should have added far more goals. Goal scorers were Costa (2) and Robert who was also named Man of the Match.

Chris Gregoriou’s Under 16 White came through a superbly competitive match to win 4-2. Played in the correct spirit and playing some of their best football, the team scored four reat goals seal their first home league win of the season to remain unbeaten in the league.

Omi Omirou’s Under 12 Green continued their good form, winning 2-1. Goals from Leo I and Alex K sealed the win with Louis L named Man of the Match.

The Under 15 Green suffered a rare defeat as two defensive errors saw them conceded two goals in quick succession and despite incessant second half pressure they couldn’t convert many of the chances they created. Man of the Match was George Stasi.

Tony Kromidies and Mario Stavrou’s Under 12 White won 3-0. The boys played a fantastic game using plenty combination play, passing, switching and creating opportunities. Mario Stavrou was a very happy coach in Sunday as he said “…the hard word is paying off.”
Goals from Agim (2) and Val. Agim was named Man of the Match.
Demi Shiamishi’s Under 14 Green played out an entertaining 2-2 draw after they found themselves 1-0 down very early on. The U14 Green’s came back into it with converting two of the numerous chances they created to go 2-1 up with 5 minutes remaining before conceding a late goal. The team missed plenty of chances to win the game. It was a lesson to be learned for the boys with manager Demi hopeful his team can go into the next game learning from their mistakes. Goals were scored by Nicolas Shiamishis and Syjil Layera with Louis Holloway named Man of the Match.
Nick Georgiou and Kenny Gregori’s Under 15 White went out of the League Cup after losing 3-0 to a team from the top division. It was a great first half performance as they held visitors to 0-0 with the goalkeeper and the defence playing particularly well. The visitors did eventually score in the second half but it was overall a much better team performance against a team which they previously lost 12-0 to in another cup game. Man of the Match was Andrew Kyriacou.

Adam Demetri’s Under 12 Silver shared eight goals with their opponents. The team had a good and maybe can count themselves unlucky not to win as they also missed a penalty. Adam said: “…it hasn’t been easy rebuilding the team, but the performance and work was excellent. Well done to the boys.”

Goals were scored by Nicola (2), Ru and Anochy with Peter Christofi named Man of the Match.
Savva Zavros’ Under 12 Gold were unluckily knocked out in the League Cup on penalties after an exciting, action packed game in which the team performed admirably. The whole team were named Men of the Match.

The club are also proud to announce that the young goalkeepers at the club will this season be coached by former England Youth international Deger Zekai, with training taking place every Friday at one of the club’s training venues.
Should you feel enthused and want to know more about Omonia Youth FC, you can contact the club at omoniayouthfootballclub@hotmail.com, via the contact page on the club’s website www.omoniayouthfc.com as well as following the club on twitter @OmoniaYouthFC and Instagram @omoniayouthfc1994.