Cause for celebration for Omonia Youth FC 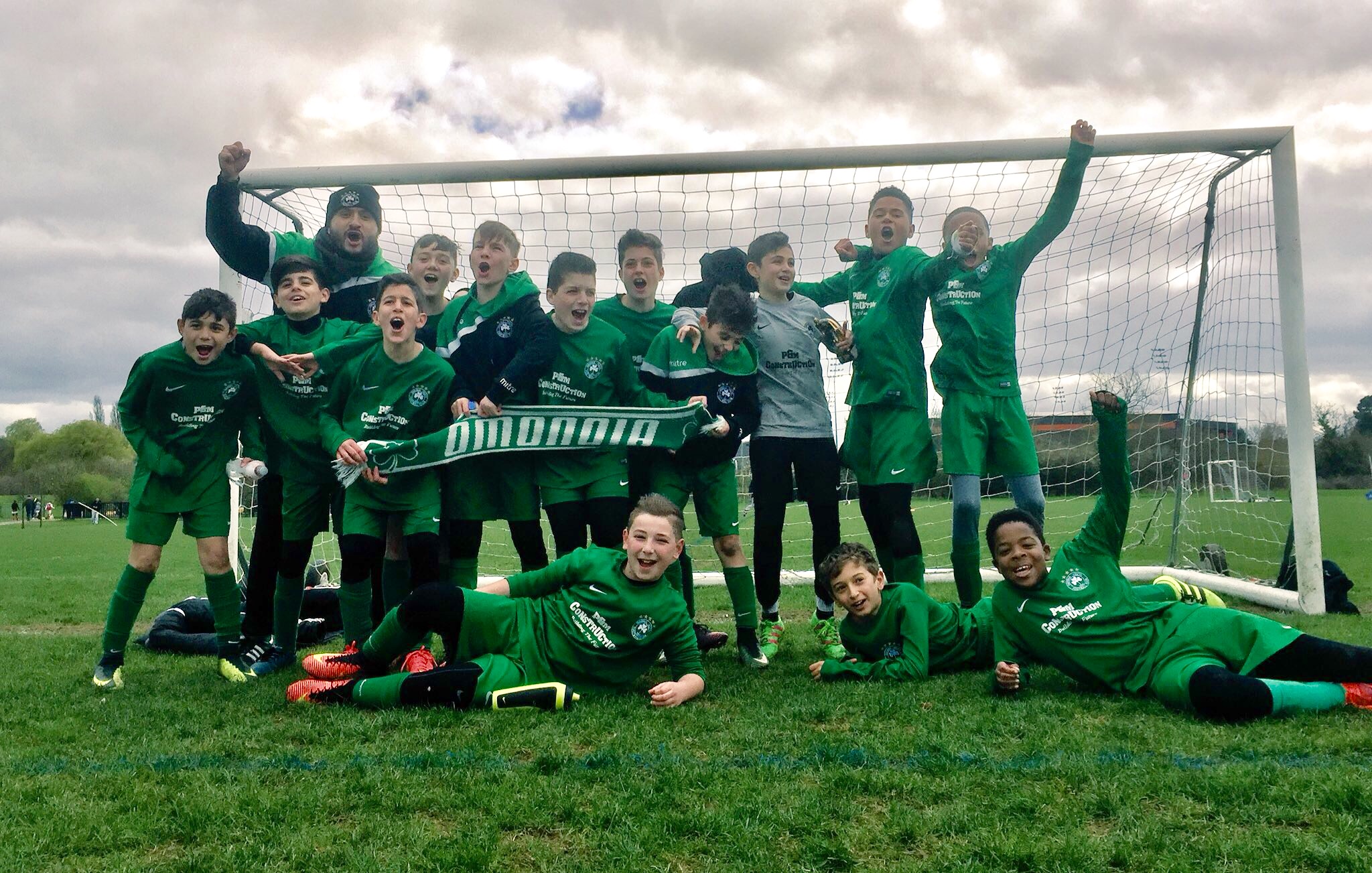 Community football club Omonia Youth FC, sponsored by P&M Construction Ltd, had plenty to celebrate last Sunday as many of their teams were involved in significant fixtures in the league and cup and came away with noteworthy results.
Panos Papa-Michael and Andy Michael’s Under 13 Gold came up against last year’s champions and came away with a brilliant 2-1 win. Playing with only 10 men, the Under 13 Gold also came from behind to win. Manager Panos commented how proud he was of his team who he said “…showed great character, mental strength, desire, passion and quality…”
Youssef Habibi scored goals. Man of the Match was awarded to both Emilio Kadis and Fabion Zylyfi
Three Under 12 teams played on Sunday and all won.
George Sammoutis and Harry Theodorou’s Under 12 Silver won 2-1 in a tense and hard fought match. Nicholas Theodorou and Ben were the scorers with Nicholas and Oscar awarded jointly Man of the Match.
Nick Lingis and Mario Christoforou’s Under 12 Green continued their quest to win the divisional title with a 3-2 win. Several missed chances meant they had to wait until late on to secure important three points. George Androutsos scored twice and Georgios Christoforou got the other goal. Amaan Salim was named Man of the Match.
One of the performances of the week saw Michael Pieri’s Under 12 White go away and win 6-1 to clinch promotion and finish the seasons as champions.
It was a fantastic performance from the team who won emphatically and scored six excellent and varied goals. Manager Michael was unequivocal in his praise of the team as he said: “I am very proud of what the boys have achieved this season. This was our aim and the boys delivered. They are talented and showed their quality and deserve their success. A big thank you to the parents too whose commitment and unstinting support ensure the team has a fantastic camaraderie which bonds us all together.”
Sammy Hristov (2), Vaughan Frederick, Pano Chambi, Owen Bluffield and Alfonso Rosselli were the scorers. Man of the Match was Stefanos Pieri who pulled off two incredible saves which even had the opposition coaches applauding.
Another proud manager was Nick Zimaras who saw his team suffer a 3-2 defeat. This meant that the Under 16 White have been knocked out of the Spring Cup having reached the last four final. Nick said: “Despite losing Carlos and Michael prior to the game and then our goalie just before half time to injury, the boys played a superb game. They showed character and in second half outplayed their opponents. The referee was superb today too. The game was played in an extremely competitive and sporting manner and I am an extremely proud manager.”
While Elia Constanti’s Under 16 Green also lost, their 4-2 defeat did not prevent them from qualifying for the semi-final of the Spring Shield as they topped their mini-group having won the previous two matches. It was a great effort from the boys in the second half but they gave themselves too much to do because of a slow start. Goals were scored by Hamza Salim and Christian Medina. Man of the Match was Hamza Salim
Chris Gregoriou’s Under 15 White lost 2-1 in the Spring Plate after a dominant first half display. Having gone into half time 1-0 up, the Under 15 Whitemade too many mistakes and were made to pay. George Kyriacou got the goal with Liam Togher named Man of the Match.
After a setback last week, Kyri Georgiou’s Under 15 Green won 3-1. It was a very good disciplined performance as the team showed great resolve to back from a goal down. An own goal and two goals from Solos sealed the win with Alession named Man of the Match.
Demi Shiamishi’s Under 13 earned an excellent and well deserved draw against a team that has occupied one of the top two positions in the league all season.
Louis O’Sullivan and Nicolas Shiamishis were the scorers with Nicholas named Man of the Match.
Andy Charalambous’ Under 14 White lost 2-0. Man of the Match was given to Rico Charalambous.
The Under 14 Green had a tough Mid Herts Cup semi-final and were unfortunate not to progress to the final. In a feisty and full bloodied match, the Under 14 Green found themselves 4-0 down at half time but they came back strong in the second half, scored two goals and also had two other goals disallowed. The boys did the badge proud and will go again next week. Louis Cooper scored both goals and was named Man of the Match.
Finally, Omonia Youth FC, in association with NL Sports, will again be putting on their popular football camp during the school Easter break. For more details please see the poster elsewhere on this page, contact the club or NL Sports directly: NLSports@mail.com or 07515445435.
Should you feel enthused and want to know more about Omonia Youth FC, you can contact the club at omoniayouthfootballclub@hotmail.com, via the contact page on the club’s new website www.omoniayouthfc.com as well as following the club on twitter @OmoniaYouthFC and Instagram @omoniayouthfc1994.