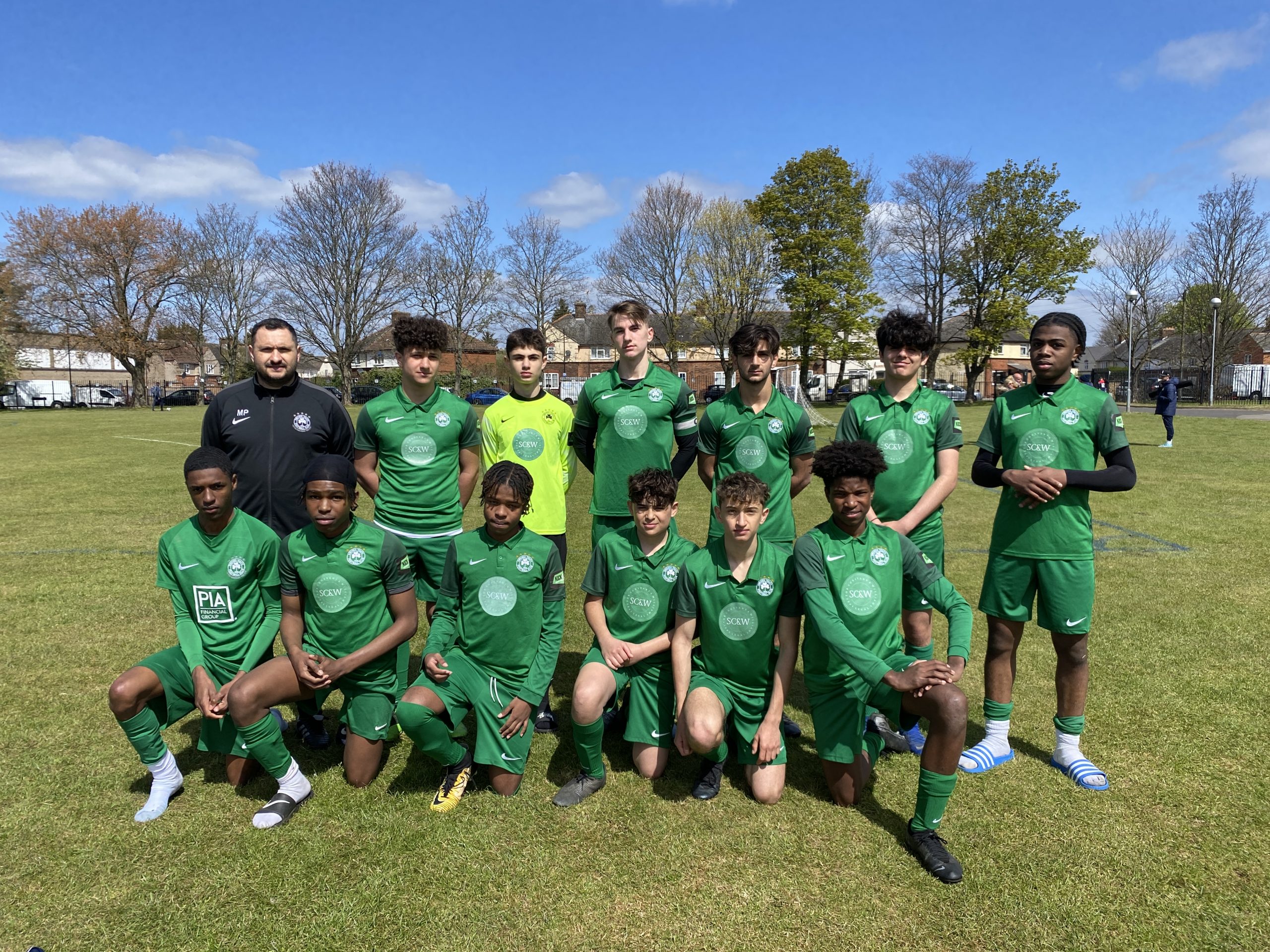 George Pantelides Under 16 girls edged out their opponents 2-1 in a very close match thanks to a rocket from Emilia and Nehir playing only her second game for the club. Nehir was also named Player of the Match for her the composure she showed on the ball, being tenacious in the tackle and possessing great vision. Some stunning saves from Nicole (first half) and Andrianna (3 match-winning saves in second half) secured the points for the Under 16 Girls in a sometimes bad tempered affair. The team had three new players trying out for the team with Nyeeta, Maddie and Maeva all meshed well with the more established players. Mary was ferocious in midfield and Maggie was electric at right and left back. Kayla and Lydia were industrious high up the pitch while Christina marshalled her defence excellently. Moment of the match? Almost too many to choose from but the control from Emilia, bringing the ball down from a goal kick that came down with snow on it, was sumptuous. The opposition touchline, Omonia Youth fans, her teammates and her coaching team of George and Rafael could only applaud the audacity of the skill. Well done all.

Myri Demetriou and Kyri Eleftheriou’s Under 12 White came away with all three points winning 2-1. In a tough match on an awful pitch, the boys did their best to play their football but had to mix it up for all of the game. A clever free kick from Andre and a sweet finish from Leo after some lovely interplay was a wonderful highlight. The Under 12 White goalkeeper pulled off a great save in the second half but a late goal from the opposition, gave the opposition hope. They put us under pressure but the boys showed great strength and resilience to take the win. Man of Match was awarded to Andrew who showed composure on the ball.

Sophia Karanicholas’ Under 13 Girls comfortably came away with the win with some impressive individual performances. As a team, they  could have perhaps done better positionally and worked more as a unit, but there were many, many positives to take, especially given this was only their second game back.

The challenge that has been set is for the girls was to get out of their comfort zones and invest in their development by playing in different positions. The game itself provided a safe environment to do that. Sophia was very proud of the girls for their positivity in confronting this challenge and for the commitment they showed. Goals were scored by Shekhinah (3), Mea B, Gina and Player of the Match Orla

Tas Georgiou’s Under 14 Green played a double-header and won both games; match one 4-1 and match two 1-0. In the first match the Under 14 Green got off to a great start and scored two early goals as the boys took control and played some exciting football. Goals were scored by Man of the Match Henry (2), Jamie and Jacob.

Match two was far more tense and only a late goal from Theo to ensure Under 14 Green came away with 6 points. Parris was Man of the Match

Robert Protei and George Constantinou’s Under 13 Gold won both their games in a double-header after two routine performances winning 3-0 and 3-1. The boys played some lovely football today. Nice one-twos all around the pitch. Man of the Match was Pablo who scored all six goals.

Savva Zavros and David Poncia’s Under 15 Gold lost 4-0 and with only 11 players it was always going to be a test against a side pushing for promotion. After a very even first half the Under 15 Gold found themselves 1-0 down. Unfortunately, the second half was spent mostly in their own half and in the end the boys’ legs ran out of steam with the opposition scoring three more in the last 15 minutes. It’s certainly been a testing season for boys after their brilliant season last year but they continue to try and play in the way they have been coached to play and the coaches cannot ask for any more than that. They continue to give their absolute best each week and both Savva and David are rightly extremely proud of them for that.

Marty Tryphona and Abdullai’s Under 11 Girls again enjoyed their match. It was pleasing to note that given it was a tough match, the opposition manager allowed the team to play extra players – amazing sportsmanship. The under 11 Girls played with so much passion determination and they never gave up. Three girls stepped up and played in goal and the girls’ our first touch was so much improved. The best part is they all play with a huge smile on their face and love playing.

Michael Pieri’s Under 16 White played a double header against the unbeaten league leaders and came away with one win and one defeat.

In the first match the boys were asked to play their football and work hard. The team had a plan how to play and it was executed perfectly.  The boys harassed their opponents, played the ball quickly and created chances to score. They took the lead thanks to an own goal from a glorious free kick which was impossible to defend. Well done to Yianni Sophocleous. The Under 16 White conceded on the stroke of half time and the team knew their strong opponents were going to come hard in second half, which they did but the boys weathered the storm brilliantly. There were last ditch tackles which epitomised an incredible resilience; the boys were not going to be denied! A goal from Igor on break gave them a 2-1 lead. Could they take all three points? Unfortunately, a soft penalty was conceded minutes from the end. Head did drop at the seemingly inevitable outcome but goalkeeper Stefanos Pieri pulled off a spectacular save to preserve the lead. The boys came away with a thoroughly satisfying victory.

In the second match, the boys were again superb and went into the half time 0-0. Losing a centre half and having only one sub made it tough and two errors gifted the opposition two goals and they scored two more. Man of the Match for the first game was Stefanos Pieri while Sami Hristov was awarded the honour in the second – a true captain’s display for 100 minutes.

Mario Yiasemi’s Under 14 Gold had a double-header where they lost the first and drew the second.  In the first match the boys did not start too well and went 1-0 down before getting an equaliser.  Unfortunately, a mistake from a free kick they made it 2-1. In the second match, the boys played far better but found themselves 4-2 with only five minutes and turned it around to draw 4-4. Man of the Match was awarded to the whole team.

Nick Georgiou’s Under 18 Gold won 7-2 away in a great away performance. Having gone into half time 2-2, changes made at half time paid dividends. The boys were more decisive and composed on the ball allowing them to create many opportunities to score. Goals were scored by Man of the Match John Young (4), Michael Vassiliou, Jack Nash and Stefano Kizas.

Mike Petrou’s Under 18 Whites played their first full match since lockdown and were dominant in a 7-4 win.  The boys worked hard for each other and controlled the game to the end.   Man of the Match Tanzid Salih scored five goals with Alex Loizou and Tom Sidfor getting the other two.

Mike Koumi and Adam Broomfeld’s Under 13 White stayed top of the lead with two wins in their double-header winning 3-2 in both games. Goals were scored by Georgie, Chris and Thomas in the first match with Davide, Luca and Nick scoring the goals in the second. Luca was named Man of the Match for outstanding performance in both games.

Tas Georgiou’s Under U14 Green won their match by the odd goal in seven. Playing the league leaders, they put on one of the best performances. They showed desire, spirit and their work rate was amazing ensuring their efforts were rewarded. Man of the Match Yullian grabbed a hattrick with Kaya getting the other goal.

Zeno Vryonides and Vas Simou’s Under 13 Green played a double header where they lost the first match but drew the second with a strong display where the boys fought for possession and pushed themselves to ensure they didn’t lose two in a row.

The Men’s team, which is sponsored by Crown Mobile Tyres, Athletic Development Club, The Master Locksmith, CJAZ Consulting and RAMEK asset management came off their first win last week to grab another point in a pulsating 2-2 draw away from home. However, if the team took all the chances, they created in the first half they would have had an easy win but the boys dug in and grafted to get a point after coming from behind twice to earn a draw.