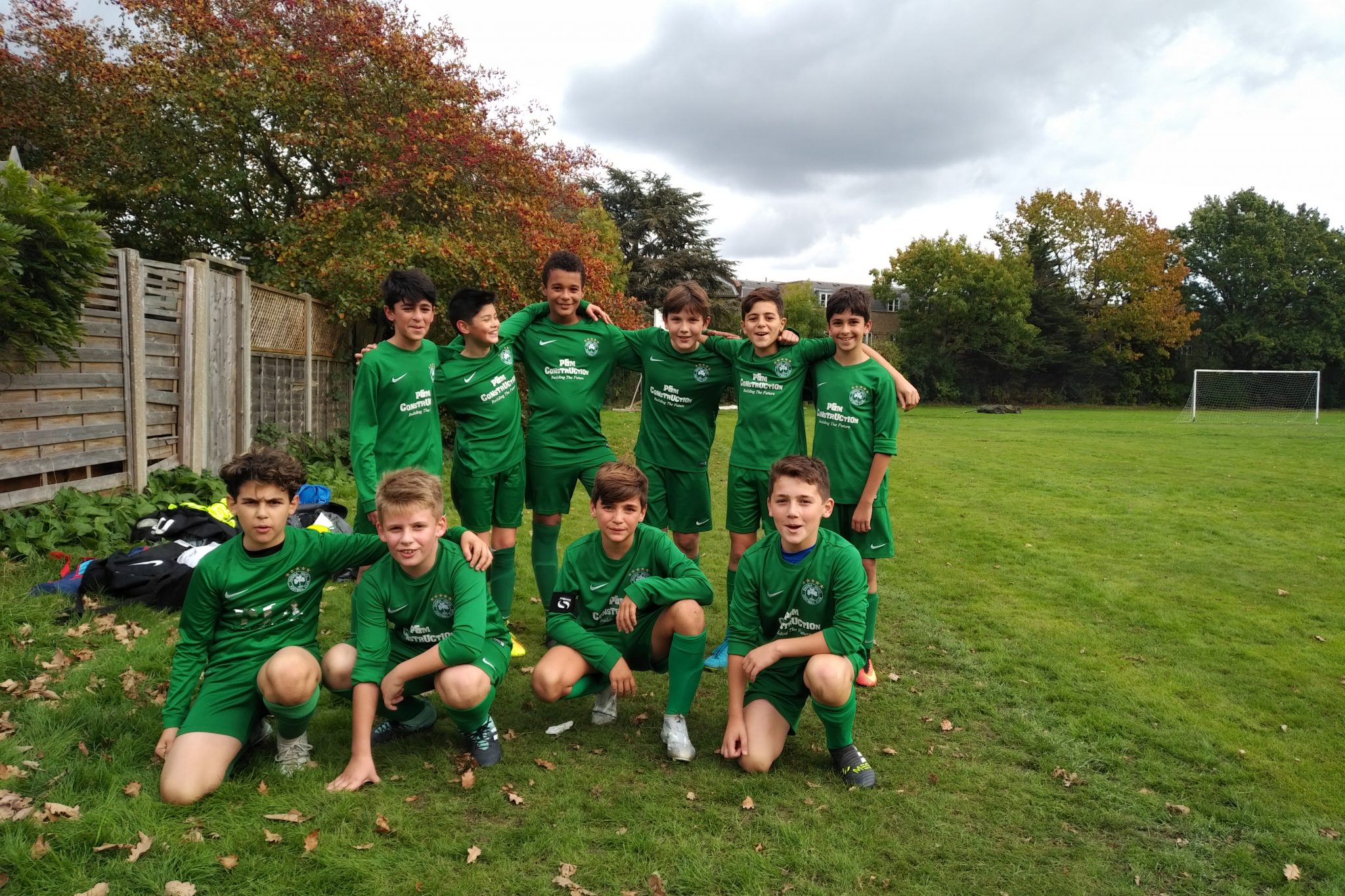 Omi Omirou’s Under 12 Green booked their place in the last eight with a 4-2 win at home. Goals from Mikey O, Step P, Jamal M and Billy O. Man of the Match was given to Luca A.

In another fourth round tie, Jimmy and Chris Mousicos’ Under 13 Gold were dominant as they won 5-1 to also book their place in the quarter-finals of the prestigious Middlesex County Cup. Goals were scored by Rayen Haboubi, Cem Poyraz, Charlie Mousicos, Louis Georgiou and an own goal. Man of the Match was awarded to Cem Poyraz. Good luck in the next round to both teams.
In league action, Savvas Zavros’ Under 12 Gold lost 2-1 in what was a great display of football in the first half but unfortunately lost their way in the second which ultimately cost them the game. Leo Capsalis scored the goal with Max Albrecht named Man of the Match.
Bu contrast Mario Stavrou’s Under 12 White scored a thumping 7-2 win to end the year on a positive high. Mario comment how “…the boys played outstandingly well.”

Nick Georgiou and Kenny Gregori’s Under 15 White also end 2017 with a win, taking all three points at home. Nick commented enthusiastically after the 1-0 win by saying: “…it was a great team performance today from all the boys and a well-deserved victory…our boys battled well from the beginning to the very end and have ended the year on a positive note!”

Goal was scored by Man of the Match Peter Michael
George Sammoutis and Harry Theodorou’s Under 13 Silver went on another goal frenzy as they thrashed their opposition 10-0 with six different players on the scoresheet. Rohan (2), Joe (2), Ben (2), Victor, Oscar, Jacob and an own goal with ben being named Man of the Match.

Michael Pieri’s Under 13 White couldn’t make it a clean sweep for the age group as his side went down 3-1. In a game of two halves the White’s went in at half time 3-0 down but came out with purpose in the second half. Having got an early goal back through Alfonso Rosselli, the incessant pressure unfortunately didn’t yield any more goals. Two efforts came off the woodwork and several other chances could not be converted. Man of the Match was awarded to both Kyle Ellis and Kyle Lapompe.

The Omonia Girls team had a very tough game in windy and wet conditions. Some good passing and terrific defending at times, but unfortunately Omonia Girls lost 2-0 away in the Essex county league. Player of the match Sapphira Kyriacou.
In the league, Kyri Georgiou’s Under 16 Green won 2-1 in a really tough game played in difficult conditions. Having to come back from goal down, the team showed great spirit to eventually win 2-1 thanks to goals from Costa and Solos. Costa was also named Man of the Match.

Notwithstanding the important county cup victories, the performance of the day came from the Under 15 Green in the Mid Herts Premier League who put on an outstanding performance to beat their top of the table opponents 4-2.

The Greens took an early lead through George Stasi and even though they were controlling the game their opponents equalised against the run of play through a defensive mix up. The Greens continued to control the first half and two quick fire goals from George Stasi completed a superb first half hat trick giving Omonia a 3-1 half time lead. Having to endure sustained pressure in the second half, the Green defence stood firm as the team worked their way back into the game. The fourth goal was scored by George Stasi again. The goal capped a superb individual performance from last season’s top goalscorer and he saved his best to last as he collected the ball on the half way line, beat two players before chipping the goalkeeper. Stunning. Man of the Match was awarded to the whole team for an outstanding effort against an excellent side.

And that is it for 2017. Youth football now goes into hibernation until the new year and on behalf of the management committee, the coaching staff and the players, the club would like to wish everyone in the community a very happy Christmas and a prosperous, healthy New Year.