Another Cup Final for the Under 15 Green 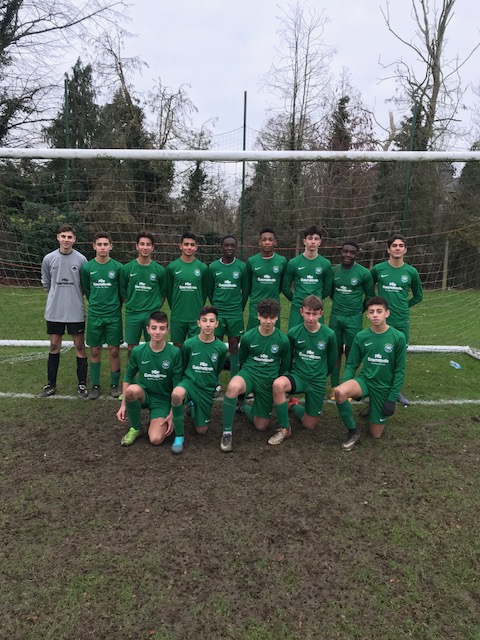 Community football club Omonia Youth FC, sponsored by P&M Construction UK Ltd, had reason to celebrate last Sunday as their Under 15 Green won their semi-final and booked their second Cup Final of the season.

The Mid Herts Premier Cup is a prestigious tournament for the teams playing in the Mid Herts League and the Omonia Youth FC Under 15 Green will take their place in the final after winning a pulsating semi-final 3-2.

In a tight, tense game the Under 15 green started the game on the front foot and they deservedly went 1-0 up thanks to Tobenna Abanna after a goal mouth scramble. They continued to play some nice football on a difficult pitch and were rewarded with a second goal from Angelo Michael. The opposition scored at the end of the first half to halve the deficit. This set up a tense second half and the Under 15 Green should have put the game out of sight when Mikey Dionisiou crossed the ball only for George Stasi to hit the cross bar.

With 15 minutes remaining the match was all square and to compound the disappointment, the Under 15 Green were reduced to ten men following a red card. With the Under 15 Green under constant pressure, the boys defended well and with two minutes they were awarded free kick, 35 yards out. Mikey Dionisiou ran up to the ball and hit the truest of shots, the ball still rising as it hit the back of the net. A truly wonderful goal and one worthy to win any match. There was still time for the opposition to have one final chance but this was cleared off the line by Man of the Match and captain Andrew Stavrinou. A superb effort by the team and huge congratulations to all involved.

Manager Omi Omirou had no such drama as he saw his Under 12 Green win their Spring Cup quarter final 7-0. Scorers were Stef P, Louis L, Leo I, Jamal M, Jamal A, Billy O and William G. Stef P was also named Man of the Match.

Nick Zimaras’ Under 18 White earned a thoroughly deserved 2-2 draw in Spring Plate. After first 20 minutes the Under 18 Whites dominated possession but went 1-0 down. However a superb finish by Jordan after a great through ball by Joe Ramos brought scores level at 1-1. They went behind again before Rosley scored with a last minute equaliser to give the boys a deserved draw. With other results going their way, the draw sees the under 18 White progress to semi-finals of Spring Plate on goals scored! Nick was ecstatic and was praiseworthy of his, stating: “This was a superb performances by all today and my Man of the Match was Jordan who epitomised the team spirit we have.”

Chris and Jimmy Mousicos’ Under 13 Gold won their league match 4-1 with goals from Jawden Miah,

Harry Theodorou and George Sammoutis’ Under 13 Silver won again, winning 4-0. Viktor (2), Oscar and Rohan were the scorers with Jakub named Man of the Match.

Michael Pieri’s Under 13 White had a bad day at the office as they were ceremoniously thumped 7-1. Tana Hussein got the goal with Sammi Hristov named Man of the Match.

Nick Lingis and Mario Christoforou’s Under 13 Green could not progress in the cup as they were beaten 5-2. Having been 4-0 down at half time, the second half was much better but they could not turn it around against a good opposition. Tino Nicolaou and George Androutsos got the goals with Adam Bourahla named Man of the Match.

The Under 13 Girls ended a recent poor run of results with a 1-1 draw in a very entertaining game against a tough opponent. After going a goal behind, the girls fought back for a well-deserved draw with a right footed goal from Emilia. The girls could have nicked it at the end, but it was a fair result. Player of the match was Aleesa, who played both at left back and left midfield, giving an accomplished display.

Nick Georgiou and Kenny Gregori’s Under 15 White could have started their league match better as they took the lead in the first 15 mins with one of the best goals of the season from Stefanos Kizas.

Unfortunately it was all downhill after that, with mistake after mistake from the boys and they eventually lost 5-1. Man of the Match was Nick Georgiadis

Kyri Georgiou’s Under 16 Green won 5 – 1 in one of their best performances of the season. They totally dominated the game could have have double their scored. Five different goal scorers was also pleasing. Scorers were: Solon, Andrew, Michael, Yiannis and Jamal. Man of the Match was Michael. Should you feel enthused and want to know more about Omonia Youth FC, you can contact the club at omoniayouthfootballclub@hotmail.com, via the contact page on www.omoniayouthfc.com and follow the club on twitter @OmoniaYouthFC.